Why do they do that? Why do they fold the American flag like that at funerals? I’m an interminable wonderer.  I wonder why people do things.  Why do they fold the American flag like that at funerals? I wonder why there are so many bits and pieces on military uniforms?  I wonder why leaves drop off trees in autumn.  I wonder how animals know stuff.  Yesterday I was watching a dreadful but worryingly enjoyable TV series that my better half just loves to escape into, called Motherland.  (Click the link for a review. Actually it can’t be that bad … they just renewed it for a second season. The first season is on Foxtel in Australia.) Anyhow, there was a military funeral in the episode we were watching, and I wondered “Why do they fold the USA flag like that?” Without giving too much away, one of the minor characters dies and during their funeral they fold the American flat into quarters and then more quarters – it seems to go on forever – and I wondered if we honour our fallen in this way or is it only done in USA?  So here’s what I discovered, so far.

Our Australian flag can be used to cover the coffin of any Australian at their funeral.

I have copied this information from The Department of Prime Minister and Cabinet.

The Australian National Flag (ANF) is not to be subjected to any indignity nor is it to be displayed in a position inferior to any other flag except for Regal and Vice-Regal personal standards. The ANF is to always be flown aloft and free, and is not to touch the ground when being raised or lowered. It is to be handled, flown and treated in a dignified manner at all times. A personal standard or flag of the British Royal Family and flags of Vice Regal personage take precedence over the ANF.

There you go … that was more than you ever needed to know about why the Aussie flag is as it is. Now …

The following diagrams show how to fold the flag properly:

C Bring the ends together

E keep the flag bundled by winding the halyard around and under itself. So this is how to correctly fold our Australian National Flag.  Who knew?

But the UK flag is folded differently.  Here are the details.

As a Pall for a Coffin:

If a national flag is to be used on a coffin, it should be placed so that the top-left corner of the flag is over the deceased’s left shoulder. The flag should be removed before interment or cremation and folded.

If the flag is to be retained by the next of kin it can be folded using the Royal Navy’s method shown here, based on a 1:2 flag (138cm x 276cm) with no fittings (ie. ropes, toggles or clips), or using the method shown above:

(Note: if a flag is used, 1:2 proportions fits the shape of the coffin better.) 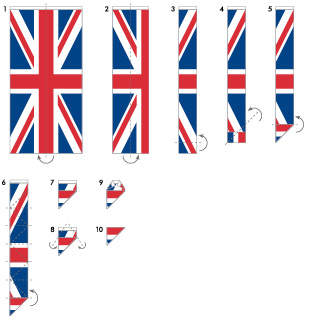 Keeping the Union Flag taut it is then folded in half (lengthways) a second time (Fig. 2).

A straight fold of 1/14 of the flag’s length (20cm on a casket cover) is taken from the foot of the Union Flag (Fig. 3). This fold may not be necessary, or may need to be a different length, depending upon the shape, size and material of the flag being folded – practise first!

The first triangular fold is made ensuring it is within 5mm of the straight edge.

The triangular folding procedure continue until it reaches the head of the Union Flag.

Any remainder is tucked away into the fold of the triangular shape.

The Union Flag is now ready for presentation. Phew.

Here’s a video on how to fold the Polish flag.

I found a non-confirmed report that this is how you fold the German flag, too.  I don’t know if this is correct but its interesting that the USA flag folding has millions of blogs and you tube videos about it, and the rest of the planet seems to be almost void of the patriotic fervour associated with the flag.  That’s not a value judgement. We should respect cultural differences. I’m not saying its right and I’m not saying its wrong, I just think its interesting.

The anonymous blogger wrote “I’m only a layman, so take this with a grain of salt. There is a special method to do this, but only for the official flag and the Navy jack. The Government has a protocol for it. If you want to do it in a semi-official way, you could follow the following procedure (I read up on it, and this is a suggestion from my understanding of that reading.  I’m not really certain this is good, tho): 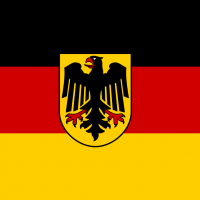 OK so as contrast, here are ALL the reasons for the 13 folds that happen when you correctly fold the flag of USA.

If you’ve attended a funeral honoring a veteran who served our country, perhaps you witnessed the folding of the flag that once covered the casket of a loved one. Each of the 13 folds of the flag holds great significance. At the Ceremony of Retreat, a daily observance at bases during which all personnel pay respect to the flag, “The flag is lowered, folded in a triangle fold and kept under watch throughout the night as a tribute to our nation’s honored dead. The next morning, it is brought out and, at the ceremony of reveille, run aloft as a symbol of our belief in the resurrection of the body.” The folding regime is very specific as to meaning:

One of the things that interests me is how these layers of meaning are not necessarily traditional, and some have been added more recently. For example, “In God We Trust” has not always been the motto of the United States – in fact, it was only adopted at the height of the Cold War in 1956, as part of a general swing towards conservative values in the fight against communism, which was atheist, of course.

You can see an Honor Guard in this video doing properly!

We’ve seen it hundreds of times in movies and TV shows, but I could find very little to zero information as to WHY we fold our flags so differently from one country to another.

Here’s a link to a video of how the Canadian flag is folded: it requires 8 people to fold it correctly!  It ends up with a corner of the maple leaf still showing.  As shown here in a box frame with relevant medals. 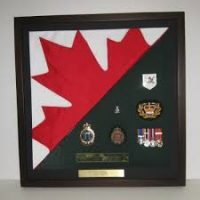 By the way, before we get “all flagged out”, I can’t forget the Australian Aboriginal Flag.  Did you know there is one? This unusual and rather beautiful flag was designed by artist Harold Thomas and first flown at Victoria Square in Adelaide, South Australia, on National Aborigines Day in July 1971. It became the official flag for the unofficial Aboriginal Tent Embassy in Canberra after it was first flown there in 1972. Since then, it has become a widely recognised symbol of the unity and identity of Aboriginal people and an integral part of Australia’s modern identity too.

In view of the flag’s wide acceptance and importance in Australian society, the Commonwealth took steps in 1994 to give the flag legal recognition. After a period of public consultation, in July 1995 the Aboriginal flag was proclaimed a ‘Flag of Australia’ under the Flags Act 1953. And in 1997 the Federal Court recognised Harold Thomas as the author of the flag.

The Aboriginal flag is divided horizontally into halves. The top half is black and the lower half red with a yellow circle in the centre of the flag.

The meanings of the three colours in the flag, as stated by Harold Thomas, are: 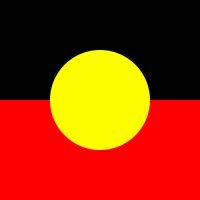 Please feel free to let me know if you have more information you’d like me to share about Vexillology. Yes, that’s the science and art of flags, flag design and flag usage!

Talk soon, and as always thanks for reading.