I saw this sign and thought it was one of the most curious I’ve ever seen.  (This doesn’t include some of those “No parking on Wednesdays after 3pm unless you’re a person called Bill in the 49th year of your life and there’s an R in the month” signs popping up everywhere that I hate because it takes longer to work out if you can park there that you intended to stay anyway.)

Anyway, I posted this sign on my Facebook page and people were genuinely intrigued to find out about what it was all about.

Well here are some links and a brief explanation about this fabulous sign and the even more wonderful places you’ll find it.

Covid put a real crimp in all our travelling for a while there, but now we’re all getting out and about again, here’s somewhere to put on your bucket list.

The Wild Atlantic Way is a 2,500km-long coastal road along the west coast of Ireland. 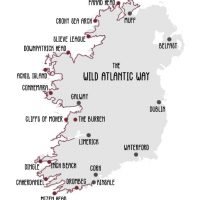 The little map on the right shows you where it is.

The tourist blurb reads: “From the wind-whipped tip of Malin Head in County Donegal to the balmy beauty of Kinsale town in County Cork, the west of Ireland will wow you with its epic landscapes and charm you with its quiet moments. This is a place that has inspired dreamers and drifters, poets and painters, with a landscape laced with dry-stone walls, thatched cottages, brooding mountains and deserted beaches. Escape, explore and enjoy an off-the-beaten track adventure on the very edge of Europe.”

Sounds great. So this unusual sign simply tells people how to get themselves back onto the Wild Atlantic Way if they’ve ventured off it for some wonderful Irish seafood washed down with a pint of the black stuff.

You can experience almost anything along this amazing stretch of road.  I’m sure you’ll love it whether walking, biking, touring in a bus or driving. I even found this booking option: I’ve actually never seen an offer quite like this before!  Have you seen Elopement Packages before?  “Sorry, Mum, Dad, I don’t want a big wedding after all, Tom and I are eloping to The Wild Atlantic Way for walks and nookie instead!” Anyway, whether you’re getting hitched or not, The Wild Atlantic Way appears to be a fabulous adventure.  To go to the website designed to help you plan your trip, just click here. You can read their blog at this link. 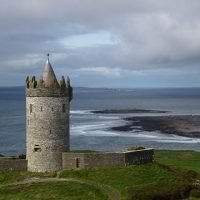 Indeed, the island of Ireland is such an interesting place to tour around. As well as all the picturesque countryside, the friendly people and fascinating history, there are over 25 Game of Thrones filming locations dotted around Northern Ireland alone.  Here’s an interesting side note: see the Westeros map? Looks familiar now?  Find out more here. It’s simply based on Britain with Ireland underneath it inverted.  To read more about the GOT locations you can visit just click this link. Doesn’t Mr Martin look just a tiny bit like a leprechaun himself! Here’s George R R Martin talking about the GOT locations.  Off on a tangent, (this happens when I am blogging!) I then read up on Wikipedia about him. Did you know the famous author has strong political views?

“Growing up, Martin avoided the draft to the Vietnam War by being a conscientious objector and did two years of alternative service. He generally opposes war and thought the Vietnam War was a “terrible mistake for America”. He has also written against the glory of war and tries to describe war realistically in his books.

While he did not endorse Barack Obama in 2008, Martin endorsed him for re-election in 2012 calling Obama the most intelligent president since Jimmy Carter.

And in November 20, 2015, writing on his LiveJournal blog, Martin also advocated for allowing Syrian refugees into the United States.

In response to fans of Martin who compared Trump favorably to characters from A Song of Ice and Fire, Martin doubled-down on his beliefs by making the case to his fans that Donald Trump shares many personality traits in common with King Joffrey, a near-universally-hated character from the series, concluding that “Trump is a Grown-Up Joffrey.” Ouch.

Anyhow, back to The Wild Atlantic Way. There have actually been quite a few complaints about the weird signs.  They have been described as “gallows” by some critics and even as “a blight on the landscape” by others, but Fáilte Ireland (the Irish tourist authority) says its discovery point signs on the Wild Atlantic Way were erected after a lengthy public consultation process.

Even so, a county councillor is now seeking clarification on whether these signs required planning permission before they were put up at some of the most scenic points along our Atlantic coastline. Fianna Fáil politician Michael O’Shea said he had received a number of complaints from residents in west Kerry complaining about what they see as “eyesores” that obscure their view of the Blasket Islands.

He is raising the issue because he says he doubts very much a public consultation process ever took place.

There has also been criticism of the structures in other parts of the country reported in local papers and in negative commentary on social media, too.

Fáilte Ireland has spent more than €400,000 on the steel structures that have been erected at 134 of the 188 ‘discovery points’ identified along the route for which interpretation panels and photo points have also been developed. It says the photo panels were developed as “bespoke artistic installations in line with international best practice” and were being installed at locations that captured the dramatic view.

Fáilte Ireland said the locations for each of the discovery points were chosen with due consideration to all environmental factors and the materials were chosen after a detailed process to ensure durability and resilience.

Fáilte Ireland spokesman Alex Connolly said because they’re erected on sites owned by the local authorities along the 2,500km route, so planning permission was not required.

Which raises an interesting point, does it not? Should planning permission be requires for something which affects the look of a place, or the view, even on land which is owned? I’m guessing the debate will run and run, as it always does for public art which is deliberately creative, as this clearly is.

Personally, I do think they look a bit like gallows, but I love reading all the fabulous Irish names and I applaud the designers trying to do something different and eye catching.

There was a huge controversy in our local area when the then Council decided to erect a series of public sculptures at key entry points to the area. The most controversial was a design by Michael Bellemo and Catriona Macleod: they were responsible for River Peel, created in 2000, made of plate steel and painted zinc coating. River Peel draws on the local heritage and surrounding landscape, imitating the Yarra River as it bends and turns through our area.

The sculpture also represents the peel of an apple celebrating the history of orcharding in Doncaster and Templestowe. In fact, everyone calls it “Apple Peel” locally. I don’t think anyone knows it’s actually called River Peel.

Everybody hated it at first, then grew to love it, and then when it had to be moved to accommodate some roadworks, complained that it shouldn’t be moved! Any truly original design is controversial – that’s how I feel about the weird sign for The Wild Atlantic Way. How boring the world would be if no one ever ‘pushed the envelope’?

Back to signs. We saw one in Wales where the majority of the population were Welsh speaking. It was the first time we had been told what we could or couldn’t do in Welsh! So just remember, ‘Dim dychwelyd o fewn 2 awr’, you parking overstayers!

The English translation down below explains what the sign means, of course, but we were a bit discombobulated at first!

Meanwhile, if any signs point you to scenes like the one below, really, what’s not to love?

And if you’re staying in Melbourne, remember to come along to one of my Workshops, and be transported to the wonderful wonderland of glass making!