What on earth is Celadon? Sometimes gorgeous colours we have been using for ages just disappear and aren’t available any more.  Boo!  But sometimes new colours in glass become available.  At the moment, the former is happening loads, with heaps of lovely new colours for glassmaking being created.  One of these exciting new colours is called “Celadon”.  But what on earth is Celadon?

To me it looks like someone has mixed grey and green maybe with a tiny touch of blue, but I’ve been searching for the history and science behind the colour if I can.

And I’ve discovered it’s new to glass, but actually has a long and fascinating history.

The colour has previously been best known in pottery circles

Celadon is a term for pottery denoting wares glazed in the jade green celadon color, also known as greenware or “green ware” (Which coincidentally is also the term we “glassies” use when we buy raw pottery molds.) 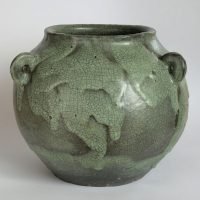 A potted history of Celadon

Celadon originated in China, though the term itself is purely European, and notable kilns such as the Longquan kiln in Zhejiang province are renowned for their celadon glazes.  Celadon production later spread to other parts of  Asia.  Eventually, European potteries produced some pieces, but it was never a major element there. Finer pieces are in porcelain, but both the color and the glaze can also be produced in stoneware and earthenware. 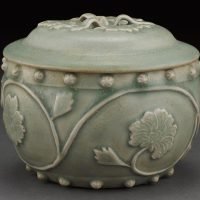 Most of the earlier Longquan celadon is on the border of stoneware and porcelain, meeting the Chinese but not the European definitions of porcelain. For many centuries, celadon wares were highly regarded by the Chinese Imperial court, before being replaced in fashion by painted wares, especially the new blue and white porcelain under the Yuan dynasty.

The similarity of the color to jade, traditionally the most highly valued material in China, was a large part of its attraction.  Celadon continued to be produced in China at a lower level, often with a conscious sense of reviving older styles. In Korea the celadons produced under the Goryeo Dynasty (918–1392) are regarded as the classic wares of Korean porcelain. The celadon colour is classically produced by firing a glaze containing a little iron oxide at a high temperature in a reducing kiln. 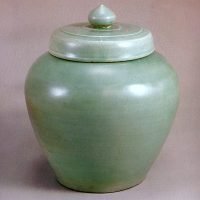 This theory of how this peaceful and restful colour got its name is interesting. Apparently the term “celadon” for the pottery’s pale jade-green glaze was coined by European connoisseurs of the wares.

The theory is that the term first appeared in France in the 17th century and that it is named after the shepherd Celadon in Honoré d’Urfé‘s French pastoral romance L’Astrée (1627). The shepherd wore pale green ribbons. (D’Urfe, in turn, borrowed his character from Ovid‘s Metamorphoses V.144.)

Another even more exotic theory is that the term is a corruption of the name of Saladin (Salah ad-Din), the Ayyubid Sultan, who in 1171 sent forty pieces of the ceramic to Nur ad-Din Zengi, the Sultan of Syria.

Can I make Celadon for my painting?

You sure can. Here’s a demonstration on how to mix celadon if you are a painter.

As you can see in these images below, I painted three eucalyptus leaves and had them produced on various products.  I do hope you like this elegant and simple design which is available on dozens of decor and clothing items. I am always painting gum leaves – they fascinate me in all their different forms. (And one of my most popular glass designs is a giant gum leap cheese board, as well!) 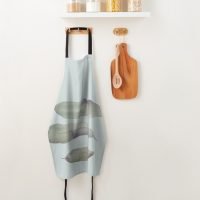 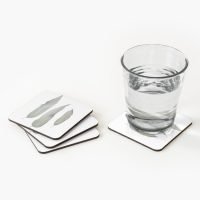 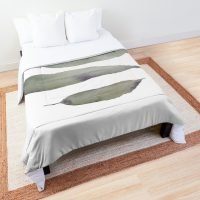 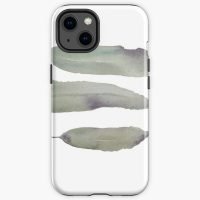 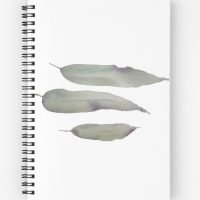 I really like this colour now.  (When I first saw it I thought I’d never ever use this colour in glass, but I actually use it a lot now.)  As you can see it here in my ever-popular “Arizona” design, it makes a really useful “accent” colour, softening and soothing more overtly colourful designs. It adds an earthy tone which I really like, and which is very “now” in design circles. 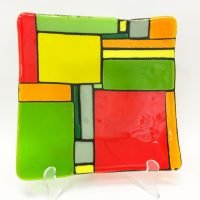 color #b5c1a5 is defined as light and the closet Websafe version is #CCCC99.

A complement of this color would be #b0a4c1, the perceived brightness of this color 186/255 and the grayscale version is #BABABA.

Will you be using it in your world?

Let me know. I look forward to hearing from you.

PS If you have any other favourite colours that you would like to know more about just let me know. I am always researching weird colour names (and other interesting words!) and would be glad to help.