What is Luminescent or Iridised Glass?

What is Luminescent or Iridised Glass? This fun blog explains all about how this this stunning coloured glass is made and how it can be used.

Well, everyone loves this gorgeous glass art piece (se below) that was made using loads of transparent green glass, turquoise glass, Caribbean blue glass as well as some glass that is black on one side and has an iridised coating on the other.

It’s a bit tricky to see in photos from my iPhone (!), but see how the glass looks different in the different pictures? As you move items around that include iridised glass the light behaves differently, giving you an ever-moving and fascinating effect.

My lovely student Lisa made this breathtaking platter in our Level Two workshop that we call Giant Fruit Platter Workshop.  You need to have successfully finished our Level One Plate Making Workshop before enrolling in this particular class. So let’s start at the beginning – what is iridescence?

One way to understand what iridescence is to remember what an oil film on water looks like when the light is being reflected from both the top oil surface and the underlying water surface.

The light reflected from these two surfaces or boundaries have slightly different wave times and so they interfere with each other to create a colourful pattern (see right). You can see this absolutely amazing effect in this lovely image of a soap bubble, too.   The light is reflecting from both the inner and outer surfaces of the film of soap on the water. 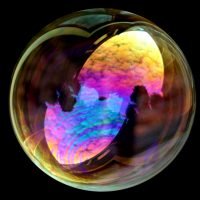 This iridescent appearance is termed thin-film interference. It is a natural occurrence in nature where there is a thin film through which light can penetrate and so reflect both off the surfaces of the film and whatever is below it. These surfaces are termed boundaries where the light can reflect.

The thickness of the film on the surface will enhance or reduce the iridised effect. At a certain thickness the light waves reflected can cancel each other out. This is described as a destructive interference pattern as it reduces the reflection. This phenomenon can be used to deliberate create non-reflective surfaces.

At other thicknesses we will see an iridised effect. This is caused by the reinforcement of the re-combination of the two light waves reflecting in phase – or nearly so.

The nature of the light hitting an object affects the colours of the iridescence.

If the light is daylight or similar it is a combination of many wavelengths. The different wavelengths reflecting from the “boundaries” or surfaces then provide the multiplicity of colour. If the film has variations in thickness, there will be variations in the colours created. This is why, when I make scultures and platters using iridised glass, people often place them on sideboards near windows to capture as much natural light as possible, or even hang them in windows. This diagram from Wikipedia shows how the reflections work at the microscopic level.

“Dichroic” glass is a specific iridescent effect in which the glass appears to be different colours, depending on the angle from which it is viewed.

This effect is caused by applying very thin layers of colloidal metals (e.g., gold or silver) to the glass.”  Dichroic glass is much brighter than iridescent or luminescent glass and is often used to make jewellery.

Watch how Iridised Glass is made in this video.

Many special effects can be applied to glass to affect its colour and overall appearance. Iridescent glass … is made by adding metallic compounds to the glass or by spraying the surface with stannous chloride or lead chloride and reheating it in a reducing atmosphere.”  There’s loads of intricate and complicated academic discussion about light and luminescence here.

My friends suggest that you put a piece of Papyrus kilnpaper over the top of Luminescent and Iridised glass when full fusing.  I think it is wise to avoid using Bullseye Thinfire in contact with the iridescence, as it sometimes reacts with the iridescence and creates pits in the glass. What do other “glassies” think?

Lots of people also suggest fusing it upside down to avoid it the surface cracking.

For more information about dichroic glass read my blog here.

I used clear iridescent glass to create these fused glass items you can see below.  They all look great on the black background: it really shows the iridised glass to best effect when you display it like this.  I love it!  If you’d like me to make any of these art glass pieces for you just email me at [email protected] 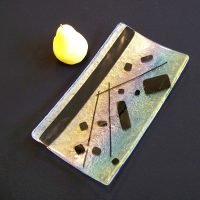 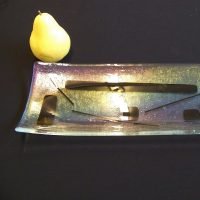 Thanks as always for reading my blog.  I hope you enjoyed it today! Happy glass-making!