What is Gamboge? Here’s a blog all about this amazing colour. What is Gamboge?  Here’s a blog all about this amazing colour.

I didn’t know until I was reading an article about “ridiculous” names of colours that Gamboge even existed.  I must admit I wondered what better name the author could have come up with for this colour? Gamboge? What a weird name!

So why do you think Gamboge was the name chosen? Well, now I know how the name Gamboge came about I really quite like it.  Read on and I’ll explain. 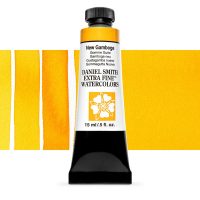 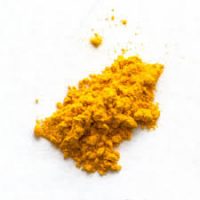 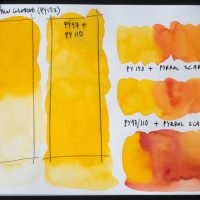 The word gamboge supposedly comes from gambogium, the Latin word for the pigment, which derives from Gambogia, which was apparently the Latin word for Cambodia. But did the Romans actually know of Cambodia? That’s another thing I think I need to check! The Romans did trade with the “Far East”, so it could be true.

Where is it from?

Gamboge is most often extracted by tapping latex (sometimes incorrectly referred to as sap) from various species of evergreen trees of the family Clusiaceae (also known as Guttiferae).

The tree most commonly used is the Gamboge tree (genus Garcinia), including G. hanburyi (found in Cambodia and Thailand), G. morella (native to India and Sri Lanka), and G. elliptica and G. heterandra (from Myanmar).  The orange fruit of Garcinia gummi-gutta (formerly called G. cambogia) is also known as Gamboge or Gambooge.

The trees must be at least ten years old before they are tapped.  Their resin is extracted by making spiral incisions in the bark, and by breaking off leaves and shoots and letting the milky yellow resinous gum drip out. The resulting latex is collected in hollow bamboo canes.   After the resin is congealed, the bamboo is broken away and thus large rods of raw Gamboge remain. Unfortunately genuine Gamboge is a colour whose poor ‘lightfastness’ has meant that finding traces in old paintings can be difficult.

The first appearance of Gamboge was in 8th century watercolours from east Asia; it was also used in Thailand in the 12th century on a black (khoi) paper scroll.

In the Middle Ages, Gamboge was used to paint ornamental letters and illustrations.

Gamboge yellow, which is also known as rattan or wisteria yellow, gummi gutta and drop gum, is an organic pigment, therefore.  You can see it here (at the bottom left) called in this case “Gummi gutta” in a comparative image with other well-known yellows. So who used Gamboge? 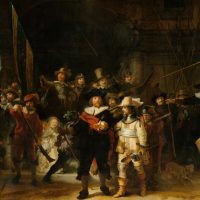 Gamboge fruit were first brought to Europe in 1603, where it was used as a cure for rheumatism, high blood pressure and as a purgative cleanser. But as with even a small dose it was lethal, it quickly lost its popularity. We can see why. So many medieval medicines were poisonous if not used extremely carefully!

The Flemish painters used Gamboge as a transparent oil colour. It can be found in Rembrandt’s works.  I wonder if there are elements of the original Bamboge in the famous “NightWatch” artwork?

JMW Turner also used Gamboge as an oil colour, though he quickly realised that it worked best as a watercolour.  Turner loved his yellows, especially when painting light in the sky, and his famous storms, of course. He would have loved this new yellow.

By the early 20th century it was replaced by a synthetic – and more lightfast – pigment, called Aureolin.

The rise of Aureolin

Aureolin (sometimes called cobalt yellow) is a pigment sparingly used in oil and watercolor painting. Its color index name is PY40 (40th entry on list of yellow pigments) and was first made in 1831 by Nikolaus Wolfgang Fischer in Breslau. Then in 1851-1852, Edouard Saint-Evre synthesized cobalt yellow independently and he is credited with the introduction of cobalt yellow as an artists pigment. Aureolin is rated as permanent in some reports but there are other sources which rate it as unstable in oils but pronounce it stable in watercolors. Others find it unstable in watercolors, fading to greyish or brownish hues. It is a transparent, lightly staining, light valued, and intense medium yellow pigment.

You just can’t get a good, long-lasting yellow very easily! Aureolin is also a rather expensive pigment and sold by several manufacturers of oil paints such as Grumbacher, Michael Harding, and Holbein. However, the pigment was never popular as an oil color and is much more widely available now as a watercolor from manufacturers such as: Winsor & Newton, Talens Rembrandt, Rowney Artists, Sennelier, Art Spectrum and Daniel Smith.

From the parka blog about the new Gaboge

So who still makes Gamboge today?

Winsor & Newton stopped production of genuine Gamboge in 2005 due to its inherent toxicity.  They temporarily replaced it with a lesser quality colour until 2013 when it was revamped yet again to an even better and more lightfast and permanent alternative.

This “New Gamboge” with the latest and most advanced pigment technology is much closer to its original namesake, thus delivering greater authenticity.

Parka Blog has written a blog comparing the new and old Gaboge pigments. 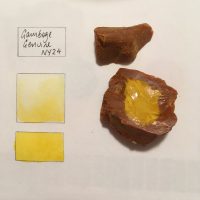 On the right you can see natural Gamboge, in its hard resin form.  When touched with a wet brush the gorgeous colour is revealed: it really is a very pure, sunny and lovely yellow. 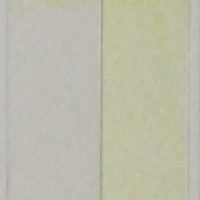 You know what? When you know what you’re looking for, Gamboge is actually everywhere!

Wondering where you’ve seen this bright and inspiring colour before?

Well, here is a new retro product that I didn’t know existed until today when I started wandering through a Gamboge wonderland on the world wide interwebs.

It’s a bottle of wonderful Veuve Cliquot champagne in an “audio cassette” styled box. This iconic throwback to the Retro movement is the new Clicquot ‘Tape’ limited edition. What a great symbol of Retro style dating back to the 1960s! The audio cassette represents much more than just a technological advancement. Back in the day, as some of us (ahem!) will remember, the cassette was a powerful form of personal expression, a vital tool for creativity and community-building. It was about all about recording and sharing memories – the first time this technology was easily available to the masses, reliable, tough, and easy to transport.

So this is a Clicquot twist on an iconic object, re-visited with a distinct design. This high-quality tin box, with various levels of embossing, and many textures and varnishes, is AU$79 at the time of writing this. And you get to drink the lovely bubbles as well as get such a great box to keep stuff in!

Will Gamboge be “this season’s colour”?

The wonderful Pantone organisation predict the top colours for each season, of course, and they are calling Gamboge “daffodil” this year.  We have daffodils just starting to come up in our driveway, and I think that’s a lovely and accurate name. Here are their latest colour predictions for Spring/Summer 2022: yes, daffodil is almost Gamboge don’t you think?

I won’t be wearing it anytime soon, mind you, as yellow clothing really makes me look ill.

If you want to find out what colours do and don’t suit your personal colour scheme, by the way, click here, to read the wisdom of my wonderful personal stylist and colour expert friend Imogen.

Hmmm … it looks almost like Gamboge is one of the catwalk fashion colours for 21/22.  What do you think? Could you – would you? – wear Gamboge? And just to show that nothing beats nature, here’s a picture my husband took at dawn when he woke up early one day on a yacht in Hook Island, Queensland, more than 20 years ago now.  Bits of this are Gamboge at its very best, I bet you agree! This was taken on a very ordinary little camera, at just the right moment, and I think you could spend ten thousand dollars on a camera and not improve it. It’s completely un-retouched – just a lucky “snap”.

Anyway, I do hope you have enjoyed my little tour of Gamboge – funny name, lovely colour. Enjoy!