The Weird Word for today is Flibbertigibbet This is another fun – albeit weird and wonderful – word! I simply love it.

Flibbertigibbet apparently refers to someone who is silly and who talks incessantly. The first known usage of this word is the 15th century and used to be spelled flepergebet.  This word also refers to a person who is ‘flighty’.  Flibbertigibbet is one of many incarnations of the Middle English word flepergebet, meaning “gossip” or “chatterer”. (Others include flybbergybe, flibber de’ Jibb, and flipperty-gibbet). It is a word of onomatopoeic origin, created from sounds that are supposed to represent meaningless chatter.

Its use in literature

William Shakespeare apparently saw a devilish aspect to a gossipy chatterer; he used flibbertigibbet in King Lear as the name of a devil.  The character Edgar uses it for a demon or imp: “This is the foul fiend Flibbertigibbet. .. He gives the web and the pin, squints the eye, and makes the harelip; mildews the white wheat, and hurts the poor creature of earth”.

But this use of this word actually never took on, unlike a lot of the curious fabulous words that William Shakespeare used.

However, the wicked connotation of the word reappeared over 200 years 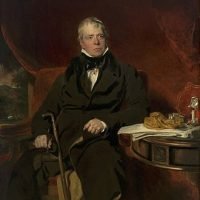 later when Sir Walter Scott (pictured here) used Flibbertigibbet as the nickname of an impish urchin in the novel Kenilworth (1821).

But the impish meaning derived from Scott’s character was short-lived and was also laid to rest by the 19th-century’s end, leaving us with only the “silly, flighty person” meaning.

Still in use today

Today it is still used as a slang term, especially in Yorkshire, for a gossipy or overly talkative person, usually (although not exclusively) when referring to a girl. (Although the word is found all over the UK.)

When you pause and think about it, you’ll probably remember it being used to describe Maria in the Sound of Music: click here to see the famous clip on YouTube.

Interestingly there are loads of blogs that talk about the real facts about Maria and the fact that she was not a flibbertigibbet in any way at all.  For loads more information about all things Von Trap-ish head here. They really were a most fascinating family and if you’ve got a spare ten minutes this page of information about them is well worth a read. P.S. Recently, I wrote a blog about another word I like: that word is Celadon.  It’s also a great new glass colour.  Click the link to find out more. Me and weird words, it’s a thing!