Sharing the skills of people from all walks of life: today Yinka Shonibare MBE, RA. I am totally entranced by Yinka Shonibare MBE‘s art!  I love everything about the scale, the application, the message, the philosophy behind his works.  I hope you enjoy this brief essay about his work.

‘Nelson’s Ship in a Bottle’ by Yinka Shonibare, originally debuted on the fourth plinth in Trafalgar Square and is now permantly on display at The Nation Maritime Museum in Greenwich, UK.

You can see it below on the fourth plinth in Trafalgar Square, so you can get some idea how enormous it is at 300cms  x 535cms x 250cms. The work is an incredibly detailed, scaled-down replica of HMS Victory, on which Nelson died during the Battle of Trafalgar on 21 October 1805.  It has 80 cannon and 37 sails set as on the day of battle. The fabrics used were inspired by Indonesian batik, mass-produced by Dutch traders and sold in West Africa.

The artist’s trademark material is the brightly coloured African batik fabric he purchases at Brixton market in London, which can be seen on many of his artworks.  The fabric was inspired by Indonesian design, mass-produced by the Dutch, and eventually sold to the colonies in West Africa where it became a new sign of African identity and independence in the 1960s. The fabric makes up the clothes on many of Shonibare’s sculptures. His multi-colored sails gesture toward us, beckoning our immersion in their journey and story. They billow outward, implying ever-moving seas, both dangerous and promising. We may peer through the bottle and dream of the ship’s voyages, but most of all we will be inspired to discover its message. Despite its encapsulation by the taut cork of the bottle, Nelson’s newly conceived and globally-adored HMS Victory is now forever mobilised.

When discussing his work, Yinka Shonibare enticingly declares: “All the rules can be broken and new fantasies can be created. In art, anything is possible.”

Shonibare draws on surrealism as both an artistic and political movement aimed at the liberation of the human being from the constraints of capitalism, the state, and the cultural forces that limit the reign of the imagination.

Shonibare’s fantastical sculptures are sometimes based on the artist’s childhood memories when he lived in Lagos, Nigeria. 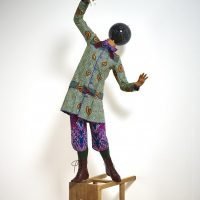 Shonibare was born in Britain, but his family moved to Lagos when he was three years old. These dreamlike sculptures evoke poetic surrealist juxtapositions, exploring the artist’s half-remembered childhood tales, as well as the constructed and fictitious memories of childhood, folklore, and tradition. Many of his sculptures reveal the magical imaginary journeys through books. In Girl Balancing Knowledge, a girl precariously balances books on her left hand, looking likely to collapse in a heap at any moment. She kicks her right foot over to her left as if in a silent, surreal dance of joy. Education was highly valued in Shonibare’s family, which is why he returned to Britain at 17 years old to sit his A-levels. This work acts as a metaphor that bridges his time in Lagos and London, a move that was driven by his hunger for knowledge. I found this interesting as well:  based in Philadelphia, The Barnes Foundation in keeping with their philanthropic philosophy held an exhibition of Yinka Shonibare’s works in 2014 titled Magic Ladders. Here is a brief description of the Barnes Foundation and how it started that I found aligned with the stories Shonibare tells in his work.

“Several of Shonibare’s sculptures refer to the Enlightenment and its ideals of rationality and exploration,” says Judith F. Dolkart, deputy director of art and archival collections and Gund Family Chief Curator at the Barnes.

“Shonibare shares Dr. Barnes’s belief that education can improve individual lives, benefitting society as a whole. Barnes turned his pharmaceutical factory into a progressive and integrated workplace, where he devoted two hours of each eight-hour workday to discussions on philosophy, psychology, and aesthetics with his employees.” The Foundation’s collaboration with Shonibare pays homage to Barnes’s interest in contemporary art and artists.

The centerpiece of the exhibition is the Barnes commission Magic Ladders, which explores childhood learning and the opportunities that education can create. In considering the exhibition and commission, the artist reviewed the complicated and decades-long correspondence between Barnes and Leo Stein, a fellow collector and an important advisor and friend as Barnes built his art collection and educational foundation. 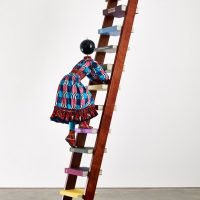 In Magic Ladders, three children ascend ladders constructed of books written or read by Albert Barnes. Other recent sculptures in the exhibition, Planets in My Head, Philosophy (2011); Planets in My Head, Physics (2010); and Pedagogy Boy/Boy (2011), echo the theme of the magical, transformative discoveries of childhood learning.

The exhibition invites viewers to reflect upon Barnes’s collecting practice, particularly in terms of its connections to colonialism. One of the first American collectors to regard African sculpture as fine art rather than ethnographic curiosity, Barnes displayed African masks and figures alongside paintings by Pablo Picasso and Amedeo Modigliani. A champion of education for African Americans, Barnes made his collection of African art broadly available to black readers through Opportunity magazine.

Ironically, his acquisition of African art was made possible by the imperialist colonization of Africa, a theme explored in Shonibare’s monumental and iconic Scramble for Africa (2003). Scramble for Africa is a pivotal work for Shonibare in its exploration of late Victorian England and its territorial expansion into Africa during the 1880s. The “scramble” for Africa by leading European and world powers resulted in the carving up of the continent, an act that was formalized at the Berlin Conference of 1884-85. Shonibare’s work depicts this historic gathering, showing various statesmen huddled around a table with a large map of Africa, eagerly staking their claims with little regard for local people or their traditional liberties and lands.

In Shonibare’s interpretation the heads of state are characteristically headless — and equally mindless in their hunger for what Belgian King Leopold II called “a slice of this magnificent cake.”

One cannot write about Yinka Shonibare MBE without mention of his stunning wind sculptures. You can see below his “Wind Sculplture VI” which is on display at The Royal Academy Summer Exhibition, in the Royal Academy Courtyard from 30th June until 20th August 2017. This show is currently running titled “Tous, des sang-mêlés” (“All, mixed-bloods”) at-The Val-de-Marne Contemporary Art Museum.  In tune with the current world affairs, this exhibition explores the notion of cultural identity through various artistic visions and experiences and asks “What is our common denominator?”

How do we build a shared culture in spite of more and more diverse/opposite origins? Those are some of the current global issues. Under the co-patronage of French historian Lucien Febvre and his book We are all mixed-bloods: a manual on the history of the French civilization (1950), and that of Stuart Hall, founding father of Cultural Studies, this exhibition highlights the fictional dimension of the concept of cultural identity. 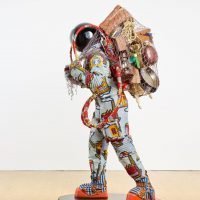 The curators have built an exhibition around different proposals that raise questions and shed light on what relates and sets us apart, on transfer of knowledge and future, on power and resistance, on individuals and communities…

Through the voice of about sixty international artists and around one hundred artworks, the exhibition investigates the topics of cultural, national and sexual identities.

They all revolve around the notion of being, yet some are obvious, others bring up –often passionate, always political- debates, and others call up memories of the past, sensitivity, experiences, and existence itself, from survival instinct to the notion of living together.

These are questions that deserve answers. That demand answers. Art not only raises the questions, it invites us to consider the answers inherent in the artist’s work and perspective. Yinka Shonibare will be exhibiting End of Empire, 2016 Curated by Julie Crenn and Frank Lamy, Assisted by Julien Blanpied and Ninon Duhamel.

The works gathered in this exhibition tackle these topics from a real-life standpoint in a spirit of exchange and dialogue.  If cultural identity is a fiction, artists have different ways to interpret, investigate and question it…while taking distance with the –all too reductive- identity perspective. 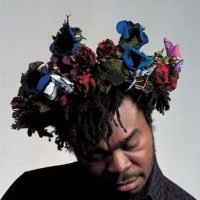 I have shown here only a small selection of the works by this amazing artist.  I do hope you have enjoyed this little foray into his work.  Please let me know if you’d enjoy some more snippets about the work of interesting and challenging  artists because I love finding out about them. And I love it when you get in touch!  My email is [email protected]