Sharing the gifts and skills of the Food Illusionist, Ben Churchill As you know I love to share the gifts and skills of all types of artists and today I’d like to introduce you to Ben Churchill.  He describes himself as The Food Illusionist. creating desserts that push the boundaries of perception. Yes indeed – look at these desserts!  They are ALL desserts! 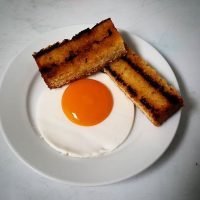 Sunny Side up?  I think not – the egg is made of a coconut panna cotta with a mango gel “yolk,” and the two pieces of toast are really grilled lemon sponge cakes.

If you’re willing to take a bite of this moldy orange, you’ll find that it’s actually a fresh orange parfait, covered with a dusting of white and green bubblegum meringue powder – hard to believe it would be absolutely delicious.  Its all about the illusion of being inedible playing tricks with our expectations! 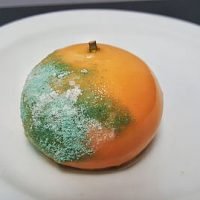 Ben describes in his blog the thought processes behind this mouldy orange.  He writes “So off the success of my edible dish washing sponge (3 million plus views!!!) I decided to step up a few ideas I had been toying with. (The bowl is filled with chocolate ganache, thyme, chocolate soil, and meringue shaped like a mushroom.)

The idea was to take my work with food illusions and apply it to something a bit deeper. Not just making desserts that look like other things, but ones that look like things that turn your stomach. Now I’m not talking the obvious (edible faeces has been suggested too many times!) I’m talking about things that really turn the stomach, but in a much more subtle and disturbing way. This is how the mould orange came about. There are so many mimetic fruit desserts around; mirror glazed apples and oranges and the like. But I wanted to go deeper. 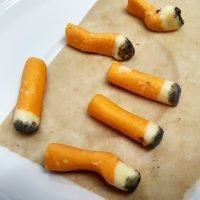 While my orange had all the flavours and techniques and looks of one of these more mainstream pastry items, I added a whole new level. Bubblegum flavoured meringue, ground to a dust, and pressed on to resemble the mould you find on a forgotten citrus fruit. Perfect. the result was exactly what I wanted.”  Its fabulous isn’t it?   This ashtray is actually a bowl of vanilla panna cotta with smoky lapsang gel, coated in black meringue powder, a silver chocolate crumb, and chocolate “cigarette butts”. 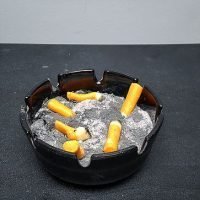 This ashtray is a pannacotta!

He created a Golden Snitch – you know what that is if you have read any of the Harry Potter books.  If you don’t know what a Golden Snitch is then here’s google’s explanation for you “The Golden Snitch, often called simply the Snitch, is the third and smallest ball used in Quidditch. It is a walnut-sized gold-coloured sphere with silver wings. … The Seeker’s goal is to catch the Snitch before the other team’s seeker, which is worth one-hundred and fifty points.”   Now you know what it is and here it is in cake form, of course, by Ben Churchill.

He says his aim was to imitate items you wouldn’t want to eat”.

Ben’s new book is available on Amazon where you can find out loads more about him, his inspiration and his culinary art works. 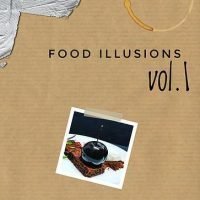 Congratulations Ben Churchill on your fabulous work and thank you for allowing me to share your art.