In the steps of Gaudi – Barcelona dreaming.

In the steps of Gaudi – Barcelona dreaming The history of Barcelona had been ever-changing and was essentially pretty brutal up until the 1280s when Jaume I’s son Pere II (11240-95) took Sicily, Menorca, Malta, Gozo, (briefly Athens), Corsica, Sardinia as well as Barcelona and united them.

If you can imagine this on a map, it created a virtual Catalan-controlled lake of the western Mediterranean. This is when many of the great buildings you see today in Barcelona were built.  Including La Catedral, the Capella Reial de Santa Agata and the churches of Santa Maria del Pi and Santa Maria del Mar.  These were all built within the city’s boundaries during the late 13th or early 14th centuries.

King Pere III (1336-87) also created the breathtaking Reials Drassanes (The Royal Shipyards) as well as extending the city walls to include the El Raval area. The Royal Shipyards of Barcelona

Following this a long period of wars, the plague, pogroms and other disasters befell the city.  In 1714 Felipe V took over Barcelona, he build a huge fort (the Ciutadella) to watch over the city and banned teaching and writing in Catalan. Barcelona was always economically busy. Its merchants had traded cotton with America (despite trade being officially banned). Napoleon turned his attentions to the attractively productive and strategic country of Spain in 1808 and Barcelona and Catalonia suffered along with the rest of the Iberian Peninsula.  The French were finally expelled in 1814, although the French were in Barcelona until the very end, leaving the city in September 1814. The 1830s saw the beginning of a more positive time for the city with wine, cork and iron industries developing profitably.

Steamships were being built and Spain’s first railway line was opened in 1848 between Barcelona and Mataro.

During this time working class families lived in absolutely putrid conditions  which lead to numerous riots. But in 1869 an ambitious plan was begun to expand and improve the city.  A grid broken up with gardens and parks and grafted onto the old town was designed by Ildefons Cerda.  The scheme was titled l’Eixample (the Enlargement).  Little towns like Gracia, Sant Marti, Sants and Sant Andreu were swallowed up by the “Enlargement”.

At this time lavish and ostentatious buildings were paid for by the Barcelona bourgeoisie.  In 1888 Barcelona hosted the international “Universal Exhibition”.    La Rambla de Catalunya and Avinguda del Paral.lel were both built hastily in 1888.  The Monument a Colom as well as the Arc de Triomf, were also built in 1888. 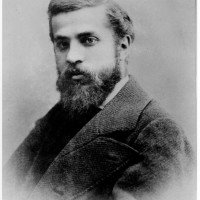 Devotees of Saint Joseph, and began a campaign for the construction of an expiatory temple dedicated to the Holy Family.

In 1881, various donations meant that 12,800m square of land could be purchased.   The first stone of the new religious building was laid on 19 March 1882, in the crypt, following the design drawn up the architect Francisco de Paula del Villary Lozano, the Sagrada’s Familia’s first architect.  But due to disagreements with the promotors, he resigned and the job, fortuitously as history will record, fell to Antoni Gaudi.

The Cathedral was planned in a city full of hope for the future, a burgeoning new world where Antoni Gaudi proposed a new and even grander design after receiving a substantial anonymous donation.

Gaudi’s design consisted of a large church with its floor plan based on a Latin cross and soaring towers.  It was deliberately intended to be immensely symbolic and to convey the teachings of the Gospels and the Christian Church, intended to be flooded with natural light.

In 1909 Gaudi built school buildings to educate the children of those working on the Sagrada Familia.  In 1914 Gaudi concentrated exclusively on the construction of his Expiatory Temple of the Sagrada Familia, and he worked on this passionately until his untimely death in June 1926 when he tragically was run over by a passing tram.  Fortunately, in 1923 he had produced the final dramatic design for the naves and roofs.  The first bell tower on the Nativity facade was finished on 30 November 1925 and was the only tower he saw completed.  He was buried on 10 June 1926 in the Crypt of La Sagrada Familia. Despite various conflicts and disputes between 1926 and today, not to mention a terrible civil war, work on the Cathedral continues along the designs laid down by Antoni Gaudi.  It is these towers, and their unusual fantastical shapes that inspired me to make this new series of glass pieces, which are my interpretation of Gaudi’s famous cathedral and his many other buildings dotted around Barcelona.

Gaudi used paraboloids to create linking surfaces between the vaults and the roof and the columns on the Passion facade, as well as larger elements such as the towers and the sacristies.  For him they represented the Holy Trinity.

You can watch an explanation of paraboloids below.

He incorporated conoids into the school building as well as other parts of the Cathedral.  You can find out about conoids and the other shapes that fascinated Gaudi in this video.

Gaudí said that colour was the expression of life, which is why he decided to make its presence felt so dramatically in the Sagrada Familia. In particular, when walking in the main body of the Cathedral, he said he wanted the dappled light and the height of the ceiling to remind you of walking somewhere in a great forest. When we visited the Cathedral in 2014 we stayed so close – right across Gaudi Park from the main entrance – that we viewed the facade through our washing; that’s hard to believe so here is the evidence. The Cathedral’s iconic design statement has stayed with me and I’ve spent months now producing more and more of these bright, cheerful eclectic pieces of glass art.  Each one is named after a Street or Lane we went down during our stay in Barcelona.

It is truly one of the most remarkable buildings in the world, and it means many things to many people. Yesterday, La Sagrada Familia was lit with all pink lights to show local people’s support for the fight against breast cancer. This is certainly a building by the people and for the people.  Barcelona is more inspiring that most other cities, and the Cathedral is its beating, living heart. What a legacy Gaudi has left us!

I do hope you’ve enjoyed sharing my brief love-affair with Barcelona and how it has been the inspiration for all these pieces in my BARCELONA SERIES, and trust me, more are on their way! Every one is unique, and will have its own edition number as well as its name.  Please let me know if you can visualise one of these exciting objets d’art  in your home and I will gladly make one especially for you. (A variety of sizes are available.) The larger versions have a retail cost of about $425, plus whatever cost is involved in posting/shipping it to you. And yes, we are not so proud that we don’t take credit cards!

Please feel free to share this blog and please let me know if you’ve enjoyed it – as the Catalans would say, A Reveure! In the steps of Gaudi – Barcelona dreaming.