How amazing is Lorenzo Quinn? As you know I love sharing the gifts and skills of all types of artists and today I’d like to introduce you to the absolutely astonishing work of Lorenzo Quinn, hence today’s blog: How amazing is Lorenzo Quinn? 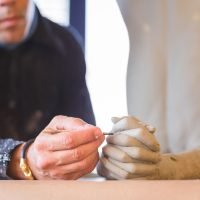 Watch this video that was released on June 8, 2019 about his life his inspiration his art his life.  If you are interested in art in the world today, you’ll be pleased you sat down and watched this 12 minute video. 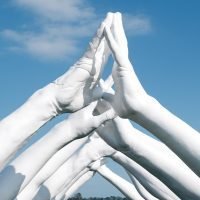 In case you decided NOT to watch the video – I’ll show you an image or two or three of his work that I think will entice you to find out more about him. 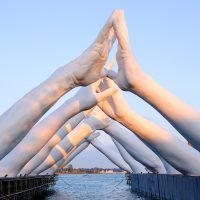 Sculptor Lorenzo Quinn triumphantly returns to Venice with yet another monumental installation. Six pairs of hands stretch across the basin of the historic Arsenal, joining together to create a bridge of unity. 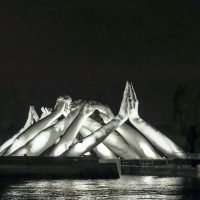 At almost 50 feet high and 65 meters wide, Building Bridges is a stunning addition to the city as it experiences the Venice Biennale. And for Quinn, it’s a spectacular bookend to his 2017 work in Venice, Support, which garnered worldwide acclaim.

Each pair of the sculpture’s hands celebrate one of six universal human values: Friendship, to build on the future together; Wisdom, to make mutually beneficial decisions; Help, to cement lasting relationships; Faith, to trust in your heart and self-worth; Hope, to persevere in worthwhile endeavors; and Love, the fundamental purpose for it all,” shares Quinn. 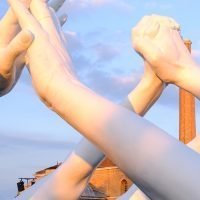 Every pair of these hands express these values through their touch. Whether lightly brushing or gripping strongly, the groups form an undeniable expression that translates universally.  These words are taken from an article about Lorenzo from My Modern Met. While the hands of his very famous Support spoke to the dual nature of humanity and its ability to be both creative and destructive in terms of the environment, Building Bridges focuses wholly on the positive. In an age when walls are being raised to divide us, Quinn looks to spread a message of unity and peace in a city built on bridges.

His work featured on the cover of National Geographic as seen in the feature image of this blog.

If you want to learn more about Lorenzo Quinn or follow him on any of the social media platforms, you’ll be able to find him there. His website home page is here. My Modern Met is about the best blog on all things art.  We should all subscribe because their articles are both inspiring and fascinating.  Thanks MyModernMet! 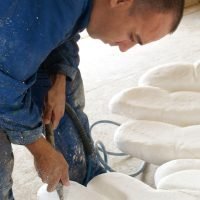 From MyModernMet and again on Lorenzo Quinn, they write abut “Hand of God”-  a piece created in 2013.  It is a visually symbolic piece representing a life journey filled with all kinds of strong emotions. This large-scale public installation features a giant hand reaching out from the ground and supporting a slouched, possibly downtrodden, figure resting atop the palm. Isn’t it moving? 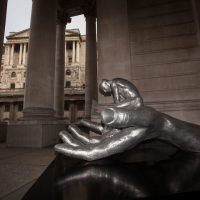 The piece encapsulates moments of self-doubt and fear and visually conveys what it is to be human. Many of Quinn’s sculptures exemplify our continuous path towards finding balance in life. In his work, he often uses a recurring theme of human hands, stating, “Hands are part of a universal language, they transcend borders.” The recognizable form provides a commonality with which viewers are able to identify, allowing every culture to connect with the work on a basic level. 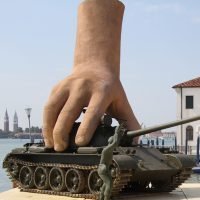 “This is not a game” by Lorenzo Quinn

After exploring different types of sculpture, including surrealism, Quinn eventually found great success with a well-received, classical approach. According to his bio, many of his pieces start first as interpretations of quotes, phrases, or poetry that then grow and develop into their final, public installations. This piece was recently unveiled in London’s Royal Exchange courtesy of the Castle Fine Art and Halcyon Gallery, and it is open to the public daily and free of charge.

You can read this 2013 Article about Lorenzo Quinn and the sculpture he created titled “This is not a game”, and you can see it here.