Everything you ever wanted to know about amazing dichroic glass, and more! The coating that we commonly call dichroic glass, is actually an “interference filter” which is permanently adhered to the surface of a piece of glass.  See how I use this amazing product to create my new “Break the Glass Ceiling” Jewellery Design – I’m running workshops where you can create you very own Break the Glass Ceiling Jewellery, find out more https://jenieyolland.com/book-now/.

See how the dichroic layer of glass looks to be turquoise on top and purple underneath at this angle: 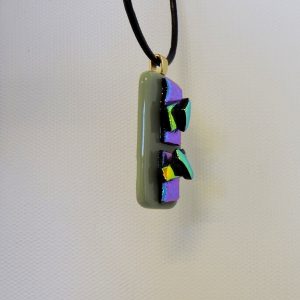 :then turn the pendant a little and the same glass “interferes” with the light and you see it differently – now the top layers look to be pale gold and lime green and the base colours appear turquoise – the purple has gone at this angle! 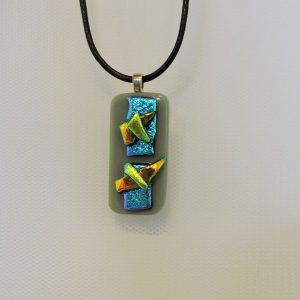 A Brief History of Dichroic Glass

The following article about the development and history of dichroic coatings was written by Mr Howard Sandberg, CFO of Coatings by Sandberg, Inc.

The technology used to manufacture the optical interference filter has been in existence for many years. It is known as “vacuum thin film deposition.”  Incredibly, the roots of this technology date back to the late 1880s.  The possibility that people could even deposit thin metal films (on glass) in a vacuum was discovered in 1887 by Nahrwold. A year later in 1888 the technique was adapted by Kundt for the purpose of measuring refractive indices of metal films.

The significant commercial development of thin film deposition, however, waited to be spurred by military and aerospace requirements in the 1950s and 1960s. Over the next 30 years this technology played a key role in coating for a vast variety of optical instruments, lasers and laser systems, fiber communication links, optical recording/storage heads and media, display systems, infrared guidance and detection devices, photoelectric converters, architectural glass, eyeglasses, and many others.

These “high-tech” coatings were capable of reflecting a narrow band of light (or one color) and at the same time, transmitting the remaining part of light.

The coating process is completed in a vacuum deposition chamber by vaporizing quartz and metal oxides with an electron beam gun and condensing micro-thin layers on the surface of the glass in the form of a crystal structure.

The noticeable brightness of light energy from the colorful coatings offered no absorption, unlike normal “Stained Glass” that derives its color by transmitting one band of light and absorbing the remaining part of light.

Jerry Sandberg of Coatings By Sandberg pioneered his first vacuum, vapor-deposited, thin film coatings strictly for use by artists. It was this pure energy of light that attracted the first sculptural glass artists to the thin film mirrors during the mid 1970s.

A renowned artist by the name of Ray Howlett was the first known artist to develop sculptural dichroic glass art pieces by constructing magnificent light boxes that bounced light and colour to infinity, producing spectacular results. Murray Schwartz was another local sculptural artist and engineer that used rejected aerospace mirrors to create sun catchers and artistic mobiles. Murray’s keen resourcefulness led him to dig in the dumpsters in the back of these vacuum deposition facilities to recover the discarded colourful, vibrant mirrors. Jerry Sandberg happened to take notice of Murray digging in the trash for these rejected mirrors and confronted him.  This was the first interaction that Jerry had with the artistic community and he was immediately fascinated with the artistic potential of the glass.  Jerry then worked with Murray to create the first three dichroic glass colours specifically designed for the art glass industry (Cyan/Red, Magenta/Green and Yellow/Blue). The coatings were costly to produce due to the highly scientific nature and complexity of the operation. These coatings were still designed as highly reflective mirrors, but they were created purely for their colour and vibrancy rather than their scientific qualities as in aerospace, optics or lasers.

The next phase in the history of dichroic glass was an event that would fire it into the history books. It was Murray’s wife Rupama, a fusing artist, that – just by chance – put a small scrap piece of a laser mirror into her kiln and melted the glass for the first time.   The coatings densified under heat producing a crystalline affect on the surface that shimmered like nothing seen before with the colours shifting with angle of view and play of light.

Soon after, Jerry also started experimenting with the coatings in the kiln.  His experiences using the dichroic glass allowed him to see first hand what other artists were now experiencing for the first time. He created sun catchers and then moved on to fusing picture frames for family and friends. Over the next 15 years Jerry continued to supply the art glass market and continually expanded the pallet of colours at the request of his ever growing coterie of artists.

In 1996 Nona & Jerry formed Coatings By Sandberg, Inc.   Their mission was to supply the art glass market with reliable, consistent, uniform and durable dichroic glass coatings at a reasonable price. By the new millennium CBS had created the international standard in dichroic glass coatings. The color shifts during hot working were predictable.  You can see here some samples of the fabulous dichroic coatings you can purchase today. Full sheets as they are available in 2016

Each year there is a competition for artists using this remarkable product: here are a couple of the examples of some of the competition winners. Here is one of my glass coaster sets that includes CBS dichroic glass  – this glass design of mine is named Sparkling Chlorophyll  because as you can (maybe) see the dichroic glass sparkles like water droplets on the green “leaves” of the glass. That’s how I see it, anyway!

Here are some samplers of my new series titled Break the Glass Ceiling Pendants – I have a workshop too where you can make them for yourself. No prior experience needed!  https://jenieyolland.com/book-now/ 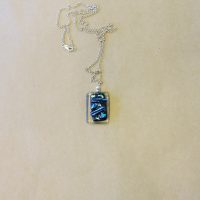 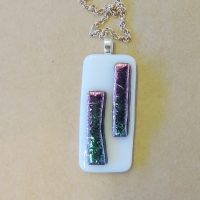 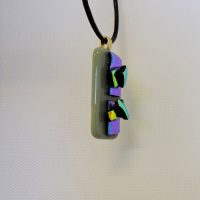 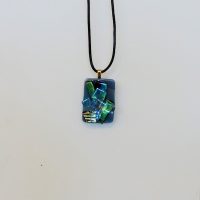 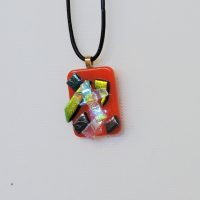 Last week, I ran an experimental BREAK THE GLASS CEILING PENDANT workshop with a friend who loves playing with glass – these are some of the pendants she created – how fabulous are they?

Want to try for yourself?

If you do, just let me know, I’m working on dates for September, October, November and December right now.  https://jenieyolland.com/book-now/ For any more information about  dichroic glass itself, go to: http://cbs-dichroic.com/

Just let me know if you’d like to come to the studio and play with Dichroic glass so you can create pendants, bracelets, brooches, cufflinks or art glass pieces to find out more about the workshops I offer go to:  https://jenieyolland.com/book-now/

I do hope you enjoyed the article and I look forward to seeing you at a workshop sometime soon.