Ever wondered where you can grab some Eye of Newt when you need it? Ever wondered where you can grab some Eye of Newt when you need it? In books and on our screens we hear all about witches brewing up Eye of Newt and other such noxious potions.  But what is eye of newt, when all is said and done?

Well, I know a newt is a type of salamander.  In its terrestrial juvenile phase it is actually called an eft.  Unlike other members of the family Salamandridae, newts are semi-aquatic, alternating between aquatic and terrestrial habitats.  Not all aquatic salamanders are considered newts. But whether newt, salamander, or frog or toad for that matter, the contents of a witch’s brew must by their very nature always sound a bit grotesque.

I’m sure you’re familiar with the famous passage during the Witches scene from Shakespeare’s “Macbeth”. (It’s further on down this article.) 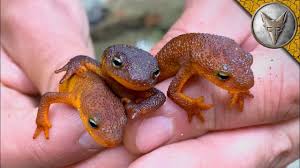 But look at that picture of newts … their eyes are pretty small – I wonder how many eyes of newts you’d need to make the brew?

Well, the good news is, no, they don’t actually use eyes of newts! Aquatic animals the world over breathe a sigh of relief. All of the ingredients in the witches brew are simply ancient terms for herbs, flowers and plants. Apparently, witches gave these flora gross and disturbing names to deter other people from practicing ‘witchcraft’, which was mainly herbal lore, and which they wanted to keep everyone from copying, so they could make a living. Here’s the translated plant list of what’s really in Shakespeare’s cauldron.

Most people agree that “eye of newt” refers to a mustard seed. Herbalists would often reference body parts when describing parts of plants. An “eye” is a seed, and mustard seeds are often dark yellow … just like the eyes of some newts, ac6ually. The seeds are usually about 1 to 2 millimetres (0.039 to 0.079 in) in diameter and may be colored from yellowish white to black. They are an important spice in many regional foods and may come from one of three different plants: black mustard (Brassica nigra), brown Indian mustard (B. juncea), or white/yellow mustard (B. hirta/Sinapis alba).

Grinding and mixing the seeds with water, vinegar or other liquids creates the yellow condiment known as prepared mustard. They’re also used for flavouring many different types of vegetable oil.

The Ancient Romans and Greeks mixed the seeds with vinegar for a flavorful sauce used on a variety of foods. Some even used it as a medicine – Pythagoras suggested using ground mustard seed in a salve for scorpion stings, and Hippocrates suggested it as a cure for aches and pains.

Mustard seeds are used as a spice in Pakistan, India, Sri Lanka, Nepal, and Bangladesh. The seeds are usually fried until they pop. The leaves are also stir-fried and eaten as a vegetable. In Maharashtra, mustard oil is used for body massage during extreme winters, as it is thought to keep the body warm.

In the Bible, Jesus tells the Parable of the Mustard Seed referring to faith and the Kingdom of God. There, Jesus says, “The kingdom of heaven is like to a grain of mustard seed, which is the smallest of all seeds on earth. Yet when planted, it grows and becomes the largest of all garden plants, with such big branches that the birds can perch in its shade.”

There are references to mustard seeds in India from a story of Gautama Buddha in the fifth century BC. Gautama Buddha told the story of the grieving mother (Kisa Gotami) and the mustard seed.  When a mother loses her only son, she takes his body to the Buddha to find a cure. The Buddha asks her to bring a handful of mustard seeds from a family that has never lost a child, husband, parent, or friend.   When the mother is unable to find such a house in her village, she realizes death is common to all, and she cannot be selfish in her grief.

In Hinduism, the reference of a mustard seed is given in ancient texts called Upanishads to explain the duality of a person’s self and the relationship of self with the universe.  It is stated that if an individual were to pick a single mustard seed every hundred years from a seven-mile cube worth of mustard seeds, then by the time the last seed is picked, the world would still be continuing on as if nothing had occurred. (It’s one of the famous early ways of explaining mathematics. If a mustard seed is 3 mm (0.12 in) in diameter, then taking one seed every 100 years from a seven-mile cube of seeds would take 936 quintillion years, 68 billion times the age of the universe.)

And according to the Hadith, Muhammad said that he who has in his heart pride that is the weight of a mustard seed would not enter Paradise. Second Witch
Fillet of a fenny snake,
In the cauldron boil and bake;
Eye of newt and toe of frog,
Wool of bat and tongue of dog,
Adder’s fork and blind-worm’s sting,
Lizard’s leg and owlet’s wing,
For a charm of powerful trouble,
Like a hell-broth boil and bubble.”

It is worth noting that this entire scene is intended specifically to please King James I, who was a pretty strange guy and an enthusiastic witch hunter, and much of it references the King’s own writings in his Daemonologie.

When he came south from Scotland to claim the throne of the newly-unified United Kingdom of Great Britain and Ireland, he was dismayed to find that few in England shared his obsession with the occult.

Witch trials had declined significantly under his predecessor, Elizabeth I, and much of the English population no longer even believed in witchcraft. Shakespeare threw in the whole witches-and-spells element of the play to please the new King (not to mention the fact that he chose to write a play set in James’ native Scotland). Many elements of the play, like many of Shakespeare’s chosen subjects, are aimed directly at the cultivation of royal favour.

You can read more about the subject here if you like: Shakespeare’s Macbeth and King James’s witch hunts.

Always a good idea to scatter some mustard seeds on your front step, by the way. Allegedly witches are very predisposed to counting and picking up things, so if you scatter mustard seeds around your front door, bed or property, the witch will never have time to get to you as she will be too busy counting mustard seeds! Eye of Newt in the world of Harry Potter

While in the Hogwarts Library researching the Second Task for the TriWizard Tournament, Harry came across this potion recipe which included water, mandrake leaves … and a newt. But interestingly,  I couldn’t find out anywhere what the potion that included Eye of Newt actually achieves in the Potterworld.  Eye of Newt was also featured in the song “Something Wicked This Way Comes.”

“Newt” is the nickname for Newton Artemis Fido Scamander (1897 – ?), the author of Fantastic Beasts and Where to Find Them.

The lowly amphibian known as a newt may indeed  be used as a potions ingredient, but it is also found in the abbreviation used for “Nastily Exhausting Wizarding Tests” or N.E.W.T.s – final exams to be taken in seventh year before graduation from Hogwarts School of Witchcraft and Wizardry. These are first mentioned when Percy Weasley is studying for them.

What’s more, a Ginger Newt is a type of biscuit (cookie) kept in a tin on Professor McGonagall’s desk, possibly a play-on-words of the British “ginger nuts.” She offers some of them to Harry after his first argument with Umbridge over whether Voldemort has returned.   After Harry’s fight with Draco at the Quidditch match, McGonagall slams her fist onto the desk so hard she scatters the Ginger Newts onto the floor.

Dear old newts. I wonder if they know they’re in a publishing phenomenon?

Have you ever played the card game Frog Juice?

Its a great, fun, quick game to play with kids of all ages.

You get to cast spells, brew concoctions, even melt witches. It’s easy to learn. Use a smidgen of math and a pinch of probability and away you go. Capture cards by matching or adding cards from your hand, then count the ingredients and measure the powers.

A splash of strategy and the potion is magic! Frog Juice teaches children to think strategically and play competitively in an active meeting of the minds.  Here aresome examples of the cards you use in this fabulous game below. I recommend picking up the game – it’s a hoot.

You can find out about loads of other Harry Potter potions and magical ingredients on this website. And interestingly, there’s a fabulous anthology about the lore and mythology of amphibians and reptiles by Marty Crump that I have posted the cover of to the right. I think I might invest in a copy. It has amazing reviews and might be of interest to anyone interested in the evolution and extinction of amphibians and reptiles.

And there’s a fascinating blog I found about the vast number of potions in Shakespeare’s plays in this article, and I recommend it! 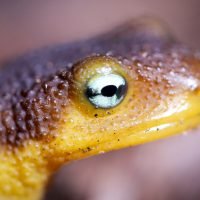 Close-up of the eye of a California Newt (Taricha torosa). Here’s looking at you, kid.

Remember, newts and salamanders make great pets and they are both popular worldwide.

They are relatively easy to care for and don’t require a large aquarium. However, while salamanders and newts may look similar, they are two different animals with slightly different needs, so research your purchase carefully. Just to confuse you further, newts are technically salamanders, but not all salamanders are newts.Got that? Right-ho.

There are also several hundred species of both, and many of them can live together peacefully.

However, most experts recommend keeping the most popular breeds we keep as pets separate.

Both animals secrete toxins that can be harmful to the other, and salamanders, often the much larger of the two, can put the newt in danger if the salamander were to become aggressive. Some salamander and newt species are cannibalistic, and one might eat the other if they see an injury or other sign of weakness. Even pets that lived in the same cage for months can turn on each other, so it’s best to house them separately or only keep one type.

And don’t ever cook them. Ugh.