Monochromats possess a complete inability to distinguish any colours and monochromats perceive only variations in brightness.

It is frequently called achromatopsia, where the retina contains no cone cells, so that in addition to the absence of colour discrimination, vision in lights of normal intensity is difficult.

While normally rare, achromatopsia is a very common condition on the island of Pingelap in Micronesia.

the second type of monochromacy is CONE MONOCHROMACY, its the condition of having both rods and cones, but only a single kind of cone.

A cone monochromat can have good pattern vision at normal daylight levels, but will not be able to distinguish hues.

It is encoded at the same place as the red-green colour blindness on the X chromosome.

Interestingly there are glasses that to some extent correct colour blindness.

On the left you can see how the colour blind person normally sees and to the right is the corrected vision.

Amazing really!   EnChroma’s Cx sunglasses are designed to help in these cases, by selectively reducing the transmission of given wavelengths of light, thus allowing red and green to stand out.

The key to the sunglasses’ performance is a proprietary coating on the lenses. Said to be harder and more scratch-resistant than glass, it can be tweaked in production to filter certain wavelengths that cause “color confusion.” The result is an improved signal-to-noise ratio in the perception of colors, in which red and green don’t just appear as variations of yellowy-brown – as an example.

Depending on their specific type of red-green color vision deficiency, users can choose between two different models of the sunglasses, designed to filter different wavelengths of light. There are also models that simply boost the intensity of all colors (for use by normally-sighted users), and that boost colors while also blocking UV rays.
People who are completely incapable of seeing any colors will unfortunately not be helped by any of the models. Also, because they are sunglasses, their color correction feature only works in bright light.

EnChroma’s Cx sunglasses should be available as of the middle of next month (April 2014).  You can expect to pay at least US$800 for a complete set of glasses, or $700 for the lenses alone.

The ishihara colour test consists of a series of coloured spots, is the test most often used to diagnose red-green colour deficiencies.  A figure (usually one or more Arabic digits) is embedded in the picture as a number of spots in a slightly different colour and can be seen with normal colour vision, but not with a particular colour defect.

Many applications for iphone and ipad have been developed to help colourblind people to view the colours in a better way.  Many applications launch a sort of simulation of colourblind vision to make normal-view people understand how the colourblinds see the world.  Others allow a correction of the image grabbed from the camera with a special “daltonizer” algorithm.  Interesting hey?

Screen shot of ishihara explaining color blindness on the iphone

Here is my glass art piece designed without any secret hidden symbols, numbers or digits.  It is simply a black and grey and white piece of glass art that I hope you like. 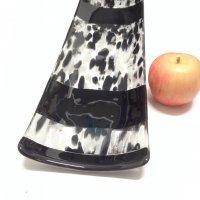 I do hope you have learned something from this blog on monochromacy. 🙂