Autumn: what’s it all about? Autumn in Australia — especially in the “Garden State” of Victoria — is one of my favourite times of the year.  Here in the upside down portion of the planet, (aka the Southern Hemisphere), Autumn begins on March 1st, 20 days before the autumnal equinox, and ends on Monday May 31st.

I love the changing colours in nature, even though I don’t enjoy winters much at all.

Once upon a time I lived in the mountains in Germany during one of their snowy winters and that was very pretty and great fun and their houses were properly heated.  But it seems in Australia that builders design houses for every season other than winter.

If I were to design a house I’d include double glazed windows (rarely seen here) and I’d have oil- or water-filled under-window radiators and  “central heating” like they have in Europe … the silent type of heating … and maybe even under-floor heating, too — ah, heaven on a cold day! Anyway, I really want to talk about how amazing nature is during autumn!

Here are some interesting factoids about autumn (in case you didn’t already know).

Why do autumn leaves change their colours?

There are several reasons why leaves change color in the fall, but the most significant contributing factors are shorter daylight hours and longer nighttime hours, and how those factors affect the chemical process inside each leaf. You might already know a little something about chlorophyll — it’s the green pigment produced by plants during the photosynthesis process. Some of the other pigments found in plants are carotenoids, which are responsible for oranges, and anthocyanins, which yield red and purple colours.

While chlorophyll and carotenoids are present throughout the growing season, most anthocyanins are produced exclusively in late summer and early autumn.

As the days become shorter and the nights become longer, the amount of light required for photosynthesis wanes, and chlorophyll production gradually comes to a halt. Without any new chlorophyll being produced, the leaves’ characteristic green color begins to break down and vanish. This mechanism essentially “unmasks” the colors of the carotenoids and anthocyanins that were lurking beneath.

While the waning hours of sunlight are the most significant contributing factor to affect changing foliage colors, temperature and humidity can also play a role in the intensity of these seasonal displays. For example, warm, sunny days coupled with cool, mild nights are a particularly potent recipe for bright colours.

In the daytime in early autumn, lots of sugars are produced in the leaf but the cool nights and the gradual closing of veins going into the leaf prevent these sugars from moving out. These conditions — lots of sugar and lots of light — spur production of the brilliant anthocyanin pigments, which tint reds, purples and crimson.

The elevation and type of tree species are two other factors that affect the timing of fall foliage. Trees in higher mountain elevations are likely to change colors more quickly than their valley counterparts within the same latitude.

If you were in USA you are able to follow the change in foliage throughout the country.  Fall Foliage Prediction Map. We certainly don’t have anything like this here in Oz.  I know the very pretty village in the north of Victoria, Bright, is our most superb locations to see the autumn leaves here in our State. Nice pub, too. So what is an Equinox?

The term equinox comes from the Latin “aequus” for “equal” and “nox” for “night,” since the equinox (both in the spring and the fall) is the point where day and night are equal.

And what is the difference between Equinox and Solstice?

While the solstices result in a change of the length of night and day, the equinoxes do not. The summer and winter solstices represent the longest and shortest day of the year respectively, while the equinoxes result in an equal amount of daylight and darkness received all across the earth.  Because it takes the Earth around 365.25 days to orbit the Sun, (which is why we have a “leap” year every 4 years), the precise time of the equinoxes varies from year to year, usually happening around six hours later each year.  On leap years, the equinox jumps back an entire day.

Between the years of 1793 to 1805, the fall equinox was the official start of each new year according to the French Republican Calendar. The French monarchy was abolished one day prior to the equinox in 1792, so the revolutionaries designed their new calendar to kick off on the equinox. By law, the beginning of each year was set at midnight, beginning on the day the autumnal equinox fell at the Paris Observatory.

Back to autumn colours. What happens to all the fallen leaves?

Planet Earth, among other things, is fantastic at recycling. Whether through the water cycle, or the slow process of decomposing plants and trees back in to rich soil, the Earth wastes very little.

When leaves fall to the ground, they begin to break down and eventually create a rich humus on the forest floor that absorbs dew and rainfall. This nutrient rich ‘sponge’ acts as a continual source of nutrients and water for trees and plants, helping to promote life and plant health in the next spring season.  It is not difficult to conclude that while the falling of the leaves protects the trees through winter, it’s likely that trees would not survive as well without the rich layer of dead leaves through the warm spring and summer months. In this way, trees’ natural cycle provides health and sustainability for itself year after year.

The colours of autumn play a big part in inspiring my glasswork and glass sculptures. 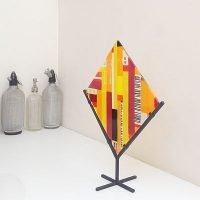 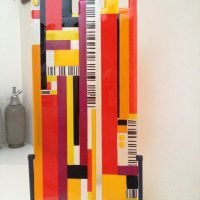 Is the sky actually bluer in Autumn?

The color of the leaves isn’t the only thing that changes in autumn. Have you ever looked up on a crisp fall day and noticed how brilliant and clear the blue sky is? That’s not just your imagination — the sky really is more blue, and science tells us why!

Strutt, a 19th-century physicist, won a Nobel Prize in 1904 for discovering the element argon, but what really cemented Strutt’s place in the history books is his discovery of Rayleigh scattering.

Named for Strutt’s inherited status as the third Baron of Rayleigh, this phenomenon explains how light scatters into different colors based on the molecular contents of the atmosphere.

Light from the sun is made up of many colors, which manifest in different wavelengths. For example, red light has the longest wavelength and, on the other end of the spectrum, violet and blue light have the shortest wavelengths.  When light passes through the Earth’s atmosphere, it comes up against thick layers of gas molecules and dust particles. These tiny atmospheric bits are closer in size to shorter wavelengths, which is why blue and violet light scatter more easily. The result is our beautiful blue sky.

It’s important to mention that although we see a blue sky, the truth is that it’s actually violet.

The reason we perceive the sky as blue instead of violet is due to the physiology of our eyes, which are more sensitive to blue than violet

As our summers continue to break records for their soaring temperatures, and unfortunately raging forest fires as a result, there’s something comforting about the seasonal reprieve that autumn brings.

Not only are temperatures milder, there’s also less humidity across the board. Since the air isn’t holding as much moisture, clouds don’t form as easily and haze doesn’t clog urban centers. The result is a crystal clear view of the stunning azure expanse of blue autumn skies, seen here through one of the trees in our garden. There are plenty of ways to enjoy autumn in Australia, and this link will show you some of them.

An autumn road trip through Tasmania, Australia’s smallest and offshore State, is the perfect way to see the picturesque landscapes as the breathtaking colours change practically before your eyes.

One of the most unique experiences is known as the ‘turning of the Fagus’. A delight for nature lovers and photographers, there’s just a short window when the Tasmanian Deciduous Beech tree transforms from green to vibrant reds, oranges and golds. Take the easy two-hour Loop Track walk in Cradle Mountain-Lake St Clair National Park, which circles Dove Lake and passes through some lovely patches of Fagus. With fewer visitors than in summer, autumn is also a great time to visit Tassie icons such as Freycinet, Wineglass Bay and Bay of Fires. PS, while in Tassie, be sure to visit the amazing Museum of Old and New Art in Hobart if you can. 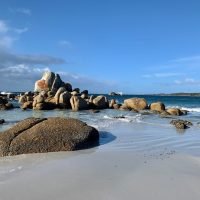 Head to the pristine beaches in Western Australia

There are some exciting things happening on and offshore in Western Australia, making autumn a great time to enjoy the cooler weather.

Start in Perth and explore the beachside suburbs of Fremantle and Cottesloe. Head north along the Coral Coast to Exmouth for the start of whale shark season to swim with the incredible gentle (and harmless) giants. Alternatively, head to Bremer Bay in the southwest corner of the state to see the largest congregation of Orca whales in the southern hemisphere. You can join a daily research boat tour to spot these incredibly fascinating creatures.  Here is a picture that I took when we went whale watching in Hervey Bay, Queensland, Australia. Yes, they really do come that close! It seems these breathtaking creatures are as curious about us as we are about them! If you don’t want to venture out of your own backyard this autumn here are some flowers you can plant during this magical season. If you’re not in Australia, just adjust for your personal location. This chart is available for other seasons from this organisation.

As I said, I’ve made loads of glass pieces using the colours of autumn, I wonder which glass piece you like the best? 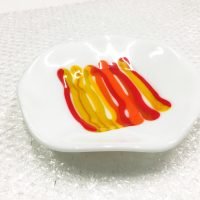 Before Covid struck I was making lots of red-headed girls as sculptural art for peoples’ homes.  Two of these are in USA now.  Don’t you just love them?  Each one is different, and of course, each one has a different name. They look so fun on the sideboard. People talk to them! Anyway, I have loved chatting about autumn with you. Please bookmark the blog and stop by often. Glass making classes (no experience required for most) are on again in Melbourne right now. Just book in or drop me a message and I will let you know vacancies.

Oh, and a slightly belated Happy Easter, everyone!