Aqua and Turquoise actually aren’t the same colour: who knew? Because of their close resemblance, it is difficult for many people to identify the difference between Aqua and Turquoise at first glance, especially if one is not used to different shades of a particular colour. But in reality, Aqua and Turquoise actually aren’t the same colour: who knew?

Which colours do you see? How many can you name?

We often find two or more colours that resemble one another to such a close extent that it becomes difficult for us to differentiate them in our mind.

Aqua and Turquoise are two such colours that are commonly taken to be one and the same, due to their obvious similarity. In fact, though, they really are different, as we will explain.

First off: Aqua and Turquoise both belong to a group of spectrum of colours called the Cyan spectrum (the commonly accepted name for the green to blue colour range – you can see it above and described below). The Cyan group comprises  colors that bear very close resemblance to one another because they all have traces of blue and green in them.  This is not the case with colours such as red and blue and as a result they are quite easily distinguishable from each other.  As you can see below, Aqua and Turquoise are not very easily distinguishable from each other so people often get them mixed up. Turquoise is a cyanish-green color, based on the gem of the same name. The word turquoise dates to the 17th century and is derived from the French turquois meaning “Turkish” because the mineral was first brought to Europe through Turkey from mines in the historical Khorasan province of Iran (Persia) and Afghanistan.  The first recorded use of turquoise as a color name in English was in 1573.  It is basically a shade of cyan.

Turquoise is an opaque, blue-to-green mineral that is a hydrous phosphate of copper and aluminium, with the chemical formula CuAl6(PO4)4(OH)8·4H2O.   It is rare and valuable in finer grades and has been prized as a gem and ornamental stone for thousands of years owing to its unique hue. Of course, nowadays it becomes very important for computer screens to display colour consistently and accurately. If you click the link you can checkout the X11 color named turquoise.  In computing, on the X Window System, X11 color names are represented in a simple text file, which maps certain strings to RGB color values. It was traditionally shipped with every X11 installation, hence the name, and is usually located in <X11root>/lib/X11/rgb.txt. The web colors list is descended from it but differs for certain color names. Turquoise through the Ages In many cultures, this gemstone Turquoise has been esteemed for its innate beauty and for thousands of years as a holy stone, a bringer of good fortune or a talisman.  The oldest evidence for this claim was found in ancient Egypt, where grave furnishings with turquoise inlay were discovered, dating from approximately 3000 BCE.  5000+ yearsd ago!

In the ancient Persian Empire, the typical sky-blue gemstones were earlier worn round the neck or wrist as protection against unnatural death.

If they changed colour, the wearer was thought to have reason to fear the approach of doom.

Meanwhile, it has actually since been discovered that turquoise really can change color.

The change can be caused by light, or by a chemical reaction brought about by cosmetics, dust, or the acidity of the skin so it is not impossible that it could reflect chemical changes in a wearer’s body. Turquoise is color that is also strongly associated with the domes and interiors of large mosques in Turkey, Iran, Central Asia, and Russia.

OK: so what is Aqua? The Oxford English dictionary says that Aqua is ‘a light bluish-green colour.’  Aqua can also be sensed as a colour sitting between green and blue.  The bright colour aqua can be spotted very easily in the colour wheel.

In the cyan range of colours Aqua is often considered indistinguishable from aquamarine and hence the real difference that interests us is between Aqua and Turquoise.

Unlike turquoise, aqua has the shades of blue and green in the same proportion.  When it comes to the RGB value, the RGB value of aqua is 0, 255 and 255.  This shows that the presence of red in aqua is zero, while green value is 255 and blue value is 255. The lack of red makes Aqua brighter than Turquoise. Aqua (which is Latin for “water”) is, like Turquoise, a variation of the colour Cyan. The web colour Aaqua is actually identical to the web color Cyan, although it is wrong to argue they are the same colour, as they are not. It was one of the three secondary colors of the RGB color model used on computer and television displays. In the HSV color wheel aqua is precisely halfway between blue and green. However, aqua is not the same as the primary subtractive color process cyan used in printing.

Aqua on the computer screen

Somewhat misleadingly, yhe words “Aqua” and “Cyan” are used interchangeably in computer graphics, and especially in web design, to refer to the additive secondary colour “Cyan”.

Both colours (aqua and cyan) are made exactly the same way on a computer screen, by combining blue and green light at equal and full intensity on a black screen.  Traditionally, that colour is defined as #00FFFF in hex, or (0,255,255) in RGB.   The #00FFFF color code is called “cyan” in the RGB color but the X11 color names introduced the alternative name “Aqua” for #00FFFF.  Later, W3C popularized the name by using it in the named color palette of HTML 3.2 specifications. Sounds complicated? It is.

Aqua is one of the three main side characters in the Konosuba comic/manga series.

Before her life in the land of Fantasy World, she was known primarily as the Goddess of water whose job was to guide humans into the afterlife.

Within the Fantasy World, she is worshipped by the Axis Order which lives in the Kingdom of Belzerg in a little place called Alcanretia.

Aqua is worshipped fanatically by her Axis Order followers, which gives her an innately high amount of Mana and makes her one of the most terrifying Goddesses in the Konosuba universe.

Are you a keen artist, amateur or professional?

If you want to know how to mix your paints to get either turquoise or aqua (very popular for ‘seascapes’) just have a look at this video.

We have great fun playing with combinations of Turquoise and Aqua in our glass studio.  They are two bright, immersive colours that always come out of the kiln looking beautiful.

You can see some examples below. 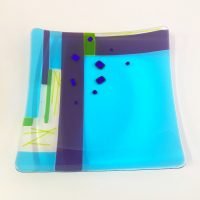 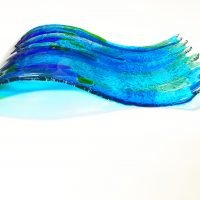 One Wave by Jenie Yolland 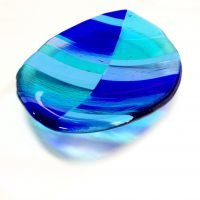 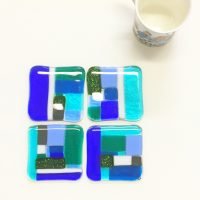 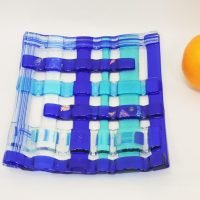 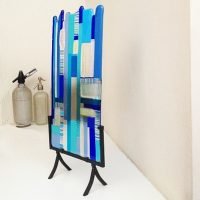 Peeping Through sculpture by Jenie Yolland 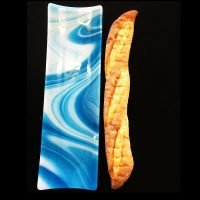 If you’d like to order a bespoke glass piece, perhaps made using these lovely colours,  please email me [email protected], and if you’d like to come to a workshop to learn how to make your own glass (you’ll be pleased you did!) have a look at our range of workshops at https://www.jenieyolland.com/workshops/

By the way, if you were wondering about the popular Tiffany colour, apparently it is neither Teal nor Turquoise nor Aqua.  Called “Tiffany Blue” its hex code is #0ABAB5. Not learned enough about colours yet? www.https://functionas.com/color-picker/ is the most amazing website where you can find any colour you want and you can easily find out its RGB, HEX or CMYK values, too.  Enjoy!