A bit of history about glass. Well, quite a bit! The date of the discovery of glass seems to be lost in antiquity; but its history is fascinating.

Obsidian was used for production of knives, arrowheads, jewelry and money. The ancient Roman historian Pliny the Elder (Ad 23-89) suggested that Phoenician merchants made the first glass in the region of Syria around 5000BC.

Pliny reported the tale of natron (soda) merchants who, when they stopped to prepare a meal, supported their cooking vessels on the beach with blocks from their cargo. The heat of the fire fused natron and sand, and a new substance was formed. This, Pliny says, was the origin of glass.

But according to the archaeological evidence, man first made glass in Eastern Mesopotamia and Egypt around 3500BC and the first glass vessels were made about 1500BC in Egypt and Mesopotamia. 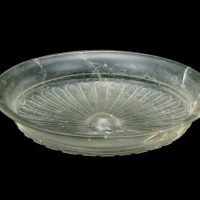 Clear phiale, ground and polished with stones or sand and water.

For the next 300 years, the glass industry was increased rapidly and then declined. In Mesopotamia it was revived in about 700BC and in Egypt in the 500’s BC.

For the next 500 years, Egypt, Syria and the other countries along the eastern coast of the Mediterranean Sea were centres for glass manufacturing.  There’s a fascinating article here about how the experts argue that glass was first in Egypt and not Mesopotamia.

Archaeological evidence for glass making during the Roman period is scarce, but by drawing comparisons with the later Islamic and Byzantine periods, it is clear that glass making was a significant industry. 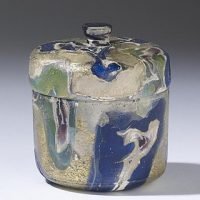 As early as 3,300 years ago, ritual instructions for glass making in Mesopotamia were written on clay tablets in a cuneiform script. These instructions were copied and recopied over the centuries.

One group of clay tablets detailing glass making is from the library of King Assurbanipal (668-627 B.C.) and is currently housed in the British Museum. Part of the translation of the tablets (from Glass and Glassmaking in Ancient Mesopotamia by Leo Oppenheim) is below.

“When you set up the foundation of kiln to make glass, you first search in a favorable month for a propitious day, and only then you set up the foundation of the kiln. As soon as you have completely finished in the building of the kiln, you go and place Kubu-images there, no outsider or stranger should enter the building thereafter; an unclean person must not even pass in front of the images. You regularly perform libation offerings before the Kubu-images. On the day when you plan to place the glass in the kiln, you make a sheep sacrifice before the Kubu-images, you place juniper incense on the censer, you pour out a libation of honey and liquid butter, and then only, you make a fire in the hearth of the kiln and place the glass in the kiln…

6th-century bottle from Syria, on display at the Landesmuseum Württemberg.

If you want to produce zagindurû-colored [a greenish type of lapis lazuli] glass, you finely grind, separately, ten minas [about one pound] of immanakku-stone [sand], fifteen minas of naga-plant ashes, and 1 2/3 minas of ‘white plant.’ You mix these together. You put them into a cold kiln which has four fire openings, and arrange the mixture between the four openings… You keep a good and smokeless fire burning until the glass glows golden yellow. You pour it on a kiln-fired brick and this is called zukû-glass.

You place ten minas of “slow” copper-compound in a clean dabtu-pan. You put it into a hot chamber kiln… You crush and grind finely ten minas of zukû -glass. You open the door of the kiln and throw the ground glass upon the copper compound…When the glass assumes the color of ripe grapes, you keep it boiling for a time … After it has become yellow [hot], you observe some drops forming at the tip of the rake. If the glass is homogeneous, you pour it inside the kiln in a new dabtu-pan, and out of the cooled-off kiln emerges zagindurû-colored glass.” 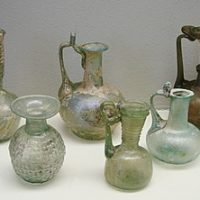 Roman glass from the 2nd century

Wow – it sounds almost as complicated as when I make glass in my kiln!

Although this ancient recipe for glass making is shrouded in mystical rituals, the same basic ingredients are still used today. A triptych of an ancient stained-glass window, with central framed aperture. Small detail is repeated in three colour versions, with space for text or insertion of an image.

By the end of the Roman period glass was being produced in large quantities contained in tanks situated inside highly specialised furnaces, as an 8-tonne glass slab recovered from Bet She’arim illustrates. These workshops could produce many tonnes of raw glass in a single furnace firing, and although this firing might have taken weeks, a single primary workshop could potentially supply multiple secondary glass working sites. Roman glass depicting a gladiator, found at Begram, Afghanistan, which was once part of the Greco-Bactrian Kingdom, but was ruled by the Kushan Empire during the contemporaneous Roman Principate period, to which the glass belongs, 52-125 AD (although there is some scholarly debate about the precise dating)

It is therefore thought that raw glass production was entered around a relatively small number of workshops, where glass was produced on a large scale and then broken into chunks.  There is only limited evidence for local glass making, and only in context of window glass.  The development of this large-scale industry is not fully understood, but Pliny’s Natural History, in addition to evidence for the first use of molten glass in the mid-1st century AD, indicates that furnace technologies experienced marked development during the early-to-mid-1st century AD, in tandem with the expansion of glass production.

The use of coloured glass in windows is of great antiquity. It is said to have been imitated from the Byzantine-Greeks by the Saracenic races, and it is continued in the cities of the East to the present day.

Coloured glass was used in the palaces of the Roman Emperors in the mosaic work with which the walls and floors were decorated, and that is supposed to have been the first form in which glass was used pictorially.

The earliest direct reference to coloured glass windows in Europe occurs in a description of the Basilica of St Paul at Rome, written in the end of the fourth century. The next allusion to it is made in an account of a church built at Lyons in the fifth century, the windows of which are described as being composed of coloured glass “arranged in patterns.” Those early windows were furnished with “stained glass”—that is, glass coloured in the pot, as distinguished from “painted glass,” which is produced by the application of colours to the surface. The earliest existing examples of painted windows are believed to be those in the Abbey of Tergernsee in Bavaria, which were presented to the abbey in the year 999.

Figure subjects do not appear to have been introduced until the middle of the eleventh century, when “The Mystery of Paschasius” was illustrated in one of the windows of a church at Dijon. The French King Charles le Chauve was the first great patron of glass-painting; and under the impetus it received from the encouragement of royalty, the art became universal, painted glass windows being introduced into all religious edifices of any pretensions.

In the twelfth and thirteenth centuries glass-painting reached its highest point of perfection, the French being the most successful artists. The mosaic and medallion windows of the thirteenth century are considered to be the best specimens of decorative work ever produced. The oldest English examples of that period are in Canterbury and Salisbury Cathedrals; but the finest are in York Minster and Lincoln Cathedral. In France the chief works of the same age embrace some of extraordinary grandeur and beauty —such as the windows of the cathedrals of Chartres, Bourg 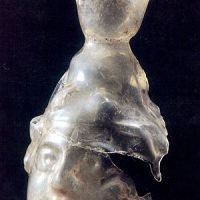 es, Paris, Amiens, and Rouen, and in the magnificent Sainte Chapelle at Paris.

The first mention of glass in English history relates to the glazing of the windows of a church at Wearmouth, in Durham, which was done in the year 674 by workmen brought from abroad.

I do hope you’ve enjoyed this little blog. I love working with this amazing substance, and I hope you enjoy learning abut it from my articles. If you want to see my glass work or book in for one of my classes, just head to jenieyolland.com.